Jerry John Rawlings to be buried at Military Cemetery

Jerry John Rawlings to be buried at Military Cemetery

Ghana Web
The Military Cemetery at Burma Camp has been settled on as the place of internment for late President Jerry John Rawlings.

Speaking at a press conference to announce arrangement for Rawlings’s funeral, Information Minister Kojo Oppong Nkrumah said that he will be buried at the Military Cemetery.

As per the arrangement read by Kojo Oppong Nkrumah, the funeral activities will begin on January 22 with a series of traditional events by the Anlo Traditional Council at Anlo.

There will be a Mass at the Holy Spirit Cathedral on January 24 after which a vigil will be held in honour of Rawlings at the Airforce Base at 6pm.

Monday, January 25 will see the body of the late president being laid in state at the Accra International Conference centre for file past.

The filing past will be led by President Akufo-Addo and Vice President Mahamudu Bawumia and former heads of state.

On January 27, 2021, a burial service will be held at the Black Stars Square in Accra after which the body will be buried at the military cemetery.

Rawlings died on Thursday, November 12, 2020, after a short illness at the Korle Bu Teaching Hospital in Accra.

Rawlings To Be Buried January 27 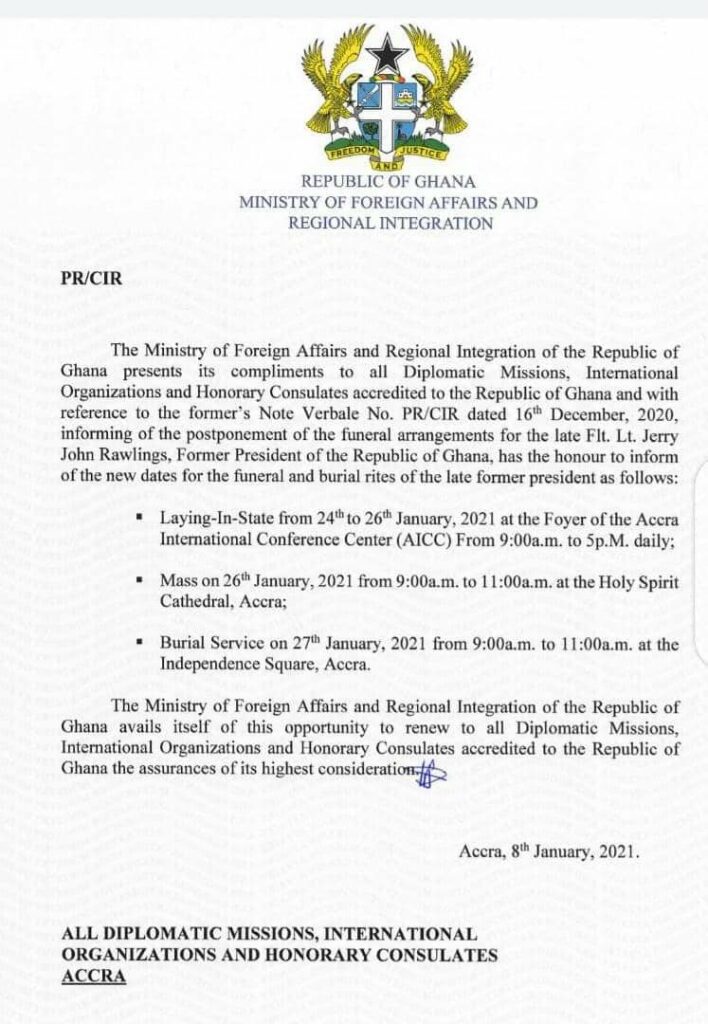 Rawlings to be buried on January 27

Here's how the late J.J Rawlings's burial service will be held

Rawlings to be laid-in-state from January 24