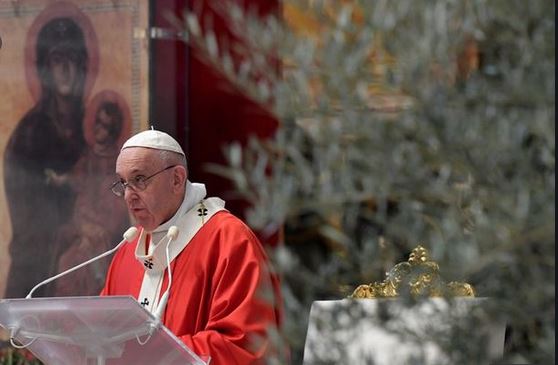 Pope Francis on Sunday began Easter week celebrations in St Peter’s Basilica under extraordinary circumstances, with no congregation allowed due to the coronavirus pandemic.

Francis led the Palm Sunday Mass accompanied only by a few priests.

For the occasion, a cross venerated for helping bring an end to a 16th-century plague in Rome and an icon of the Virgin Mary offering protection to the Roman people were placed near the altar.

The St Marcellus crucifix and the Salus Populi Romani icon featured in another ceremony on March 27, when the pope led special prayers for an end to the pandemic in an empty St Peter’s Square.

Palm Sunday recalls how, according to the Bible, Jesus Christ was feted by crowds waving palm branches as he entered Jerusalem days before they turned against him and called for his crucifixion.

Due to the pandemic, Easter celebrations at the Vatican have been slimmed down and closed to the public.

Traditional events like the Good Friday procession by Rome’s Colosseum have been cancelled.

“We will celebrate Holy Week in a truly unusual way,’’ Francis said on Friday.

In his sermon, Francis urged his listeners to turn to God “in the tragedy of a pandemic, in the face of the many false securities that have now crumbled, in the face of so many hopes betrayed, in the sense of abandonment that weighs upon our hearts”.

The Mass was broadcast on television and over the internet to many millions. Churches in countries around the world were holding similar, virtual services this week because of restrictions on gatherings.

Easter is the most important Christian holiday, commemorating the resurrection of Jesus Christ.