Kogi Guber: Shaping up of a two-horse race? 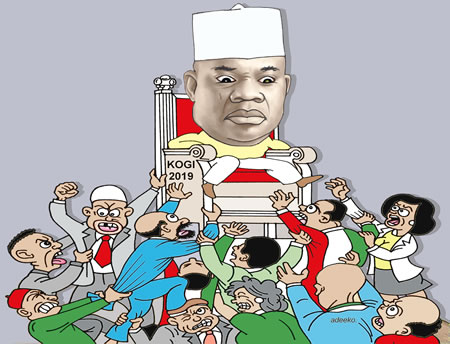 Kogi Guber: Shaping up of a two-horse race?

Tribune Online
Kogi Guber: Shaping up of a two-horse race?

As the people of Kogi State prepare for the November 16 governorship election, YEKINI JIMOH takes a look at the candidates jostling to occupy the Lugard House, Kogi State’s seat of power.

THE November 16 Governorship election in Kogi State will, no doubt, be interesting. The Independent National Electoral Commission (INEC) has already presented the register of voters to 23 political parties that have been cleared to participate in the election, about 1.6 million voters are being expected to choose a new helmsman for the state.

According to the National Commissioner in charge of Kogi, Kwara and Nasarawa states, Mohammed Haruna, 1,646,350 were registered as voters in the state as of August 31. However, only 1, 485,828 voters had collected their Permanent Voter Cards (PVCs), while 160, 522 PVCs were still uncollected.

Going by this demography, political watchers expect the election to be keenly contested by the major parties.

Saraki, Mohammed Babangida back on the roll

However, as of today in Kogi State, only two political parties are showing serious signs and making efforts towards the election. The Peoples Democratic Party (PDP) that is Mr Musa Wada, an engineer, as its candidate, and the All Progressives Congress (APC) that is parading the incumbent, Alhaji Yahaya Bello, as its standard-bearer.

The interesting aspect, however, is that about 45 of the political parties cleared by INEC to field candidates in the election have come out to endorse the candidacy of Bello, leaving just the PDP and YPP as the main challengers.

Bello and the incumbency edge

Bello, the current governor of the state, undoubtedly has the advantage of incumbency against other candidates, especially his main challenger, the candidate o the PDP.

Having governed the state for almost four years, Bello has both pluses and minuses as governor which could count for or against him in the election.

He was born in Kogi Central on June 18, 1975 in the old Kwara State before Kogi was created.

He studied at Kaduna State Polytechnic Zaria in 1995 and obtained a degree in accounting from Ahmadu Bello University (ABU), Zaria in 1999.

Bello further enrolled for a Masters programme at ABU where he obtained MBA in 2002. He later became a fellow of the Association of National Accountants of Nigeria (ANAN).

After his youth service, he was employed by the Revenue Mobilisation and Allocation Fiscal Commission and posted to Benue State before he resigned, went into private business and later into politics.

Bello contested on the ticket of the APC as a replacement for the late Abubakar Audu who originally won the election but died before the result was declared.

Today, Governor Bello has taken full control of leadership of the party in the state. Before the party’s governorship primary election, many opinion moulders did not give him a chance. However, to the surprise of the people, he won the election without a crisis. None of the contestants approached the court after the primary.

Some political observers told Sunday Tribune that with the way things are going, Bello is likely to win a second term. They are of the opinion that as the incumbent, he has the advantage of winning the election, coupled with the fact that his party, the APC, occupies the centre. They opined that the party would not like to lose the state to the opposition, considering many interests from the party towards the 2023 general election.

The governor also reportedly has the backing of traditional rulers across the three senatorial districts of the state.

Besides, members of the opposition community in the state have been defecting to the APC, especially from the PDP, the Social Democratic Party (SDP) and other smaller political parties, all pledging loyalty to the governor.

A few days ago, no fewer than 45 political parties in the state endorsed Bello for second term. The Coalition of Political Parties (CPP), at a news conference in Lokoja, the state capital, said the endorsement of the governor was sequel to his “good work in the last four years.”

Addressing journalists at the Nigeria Union of Journalists (NUJ) Press Centre, the chairman of CPP, Dr. Sani Teidi, said the various political parties had objectively analysed all the parties and candidates contesting for the election on November 16 and determined that the incumbent governor was head and shoulders above the rest.

Also, it was a total lockdown in the state capital when members of the National Union of Road Transport Workers (NURTW) and other transport unions embarked on a solidarity rally for Governor Bello. The rally, which was led across the city by the Director-General, APC Campaign Organisation for Bello/Onoja, Senator Smart Adeyemi, terminated at the party secretariat.

Speaking after the rally, chairman of the union, Jimoh Ibrahim, said the union decided to embark on the solidarity rally in view of the governor’s performance that made him merit a second term.

“Our unions boast of over 48,000 members and we have all pledged our support for Governor Bello,” he said.

He had his first degree in Building from ABU and his second in Transport from the Ogun State University (now Olabisi Onabanjo University). He has a Postgraduate Diploma (PGD) in Civil Engineering from the Federal University of Technology, Akure and a doctorate in Environmental Science from the University of Calabar.

A Fellow of the Nigerian Institute of Shipping, Wada is a member of several other professional bodies, including the Nigerian Society of Engineers (NSE), Institute of Building, among others. He is an Officer of Igala Kingdom (OIK).

Wada had been with the Engineering Division of the Nigerian Ports Authority (NPA), where he rose to become the Chief Port Engineer, Tin-Can Island Port between 2004 and 2007. There, he was in charge of general monitoring, overseeing and maintenance of the Tin-Can Island Port facilities and equipment.

His overwhelming performance, show of trust and display of true patriotism while at Tin-Can Island Port Complex led to the Nigerian Ports Authority (NPA) management board entrusting him with the responsibility of overseeing the capital project of the NPA headquarters, with his appointment as a principal manager, Capital Project of the Nigerian Ports Authority (NPA) Headquarters in Lagos.

Though Wada has been in the political for a long time, only came into active politics after resigning from NPA to contest for the governorship race in Kogi State.

During the governorship primary of the PDP, Wada defeated 12 other aspirants to emerge winner, though his victory has been challenged by Alhaji Abubakar Ibrahim Idris, who came second in the contest. With Idris in court to challenge the outcome of the election, it has been observed that the situation in PDP’s camp has put it in a difficult situation.

Some PDP members loyal to a former governor of the state, Alhaji Ibrahim Idris, have since defected to the APC. Some notable members of the party have been trading accusation over the present crisis rocking the party.

A former member representing Yagba Federal constituency at the lower chamber of the National Assembly, Honourable Sunday Karimi, a member of the PDP, has alleged that the immediate-past Senate president, Bukola Saraki, was behind the series of crisis rocking the party.

According to him in a press statement, Saraki rewarded non-party members in the state with automatic tickets during the last National Assembly election as well as in the governorship primaries.

Karimi said asking Saraki to head the reconciliation team ahead the forthcoming governorship election in the state would only end up compounding the crisis he (Saraki) created.

While noting that for long, the PDP had been neck deep in the impunity of rewarding returning and non-members, he said efforts by the former Senate president to use the state as guinea pig during the last National Assembly and governorship primaries to reward non-members was the last straw that broke the camel’s back in Kogi PDP.

Thus, some political observers who spoke with Sunday Tribune opined that the situation in the party shows that it will have to work very hard to win the coming election.

According to some of the analysts, Wada is expected to enjoy the goodwill of his people in Kogi East, but sad enough, the outcome of his party’s governorship primary has divided his kinsmen. While some are of the view that Idris was robbed by some power brokers in the PDP, others said Wada does not have what it takes to defeat the incumbent, Bello, in the election.

An analyst, Mr. Joseph Nda, while speaking with Sunday Tribune, said the problem facing the PDP would affect the party during the election. According to him, “the issue of court is there and the party doesn’t have enough money to execute the project.”

He added that some supporters loyal to the former governor of the state, Alhaji Ibrahim Idris, had defected to the APC, “because they believe that Abubakar Idris, son of Ibro, was robbed of victory during the primary.”

Is Prince Audu staging a comeback through wife?

Another governorship candidate is Professor Aisha Abubakar Audu, wife of a former governor of the state, the late Prince Abubakar Audu. She is contesting on the ticket of the Young Progressive Party (YPP).

She became the state’s First Lady between 2000 and 2003 and assisted impoverished children and families in reducing poverty.

She complimented the state government’s efforts and policy in achieving the Millennium Development Goals (MDGs), while also spearheading the development of feasibility studies and initial funding of Obajana Cement Company in Kogi State. The company is currently known as the Dangote Cement, the largest cement industry in West Africa.

Audu has BA, MA and PhD in theology. She is also a recipient of Professorship Laureate award in Philanthropy. She is chairman/chief executive officer in a number of companies as well as President/Founder of A3 Foundation. She is a partner at VCPops PVT in India and a host of other companies and organisation which she spearheads or a member of the decision making board of which she is.

In 2007, she contested against her husband, the late Prince Audu. In 2011, she also contested the governorship seat.

According to a statement from her campaign office media group, Audu will soon commence political activities across the three senatorial districts of the state.

She said her decision to contest on the ticket of YPP was informed by the party’s grassroots support and ideology.

The statement added that the political structure of her late husband, Prince Abubakar Audu, would be incorporated into the party to drive the vision of the state.

However, opinion moulders in the state said she is not a threat to either Wada Bello in the election. They also mentioned that her decision to run was a big surprise to the people, as she had never put up any political activity before, during and after political parties’ governorship primaries. They added that despite the fact that she is a fo rmer First Lady in the state, she does not have that popularity expected.

According to Mallam Abdul Jibo, “Aisha is not known in Kogi politics. She just wants to enrich her curriculum vitae. The battle is between PDP and APC. Whoever is contesting elsewhere is just doing that.”

Kogi Guber: Shaping up of a two-horse race?
Tribune Online

Scaling up African pharmaceutical manufacturing in a time of COVID-19

The race to Edo Government House