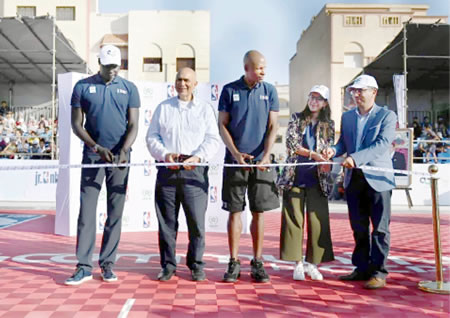 OCP Group, the world’s first producer of phosphate-based fertiliser with headquarters in Casablanca, Morocco, recently launched a partnership with the National Basketball Association (NBA), United States of America, to develop the game of basketball in Morocco and Rwanda. NURUDEEN ALIMI, who witnessed the programme launch which was held in Khouribga, Morocco, reports.

The OCP Group a world-leader in the phosphate industry, and the National Basketball Association (NBA) announced a new, multiyear partnership to expand Junior NBA programmes, teach life skills and build new basketball courts in Khouribga and Benguerir, Morocco as well as in the Rwandan capital of Kigali, while using the transformative power of basketball to empower Moroccan and Rwandan youth and their communities.

The announcement was made during the opening ceremony on the newly built basketball court at Ennahda in Khouribga, Morocco in the presence of OCP Chairman and Chief Executive Officer, Mostafa Terrab; NBA Africa Managing Director and Basketball Africa League President, Amadou Gallo Fall; and 10-time NBA All-Star, Ray Allen.

“The partnership with the NBA is part of the Act4Community initiative, carried out by OCP volunteers, with one of its major objectives being development through sport,” OCP Chairman and CEO, Mostafa Terrab said.

“The young people here are full of talent and energy and the goal of this project is to provide them with a framework where they can develop their potential through a spirit of sports excellence and coaching focused on leadership and personal development.  We are very happy to be launching this great project with the NBA in Khouribga and Benguerir”.

“We are  thrilled to partner with OCP Group to expand our Jr. NBA programming in Morocco and Rwanda.  As we continue to push the boundaries of accessibility to our game, this authentic partnership will contribute tremendously to inspire more boys and girls to play the game of basketball and grow with its core values while also empowering coaches and programme administrators as role models for the youth in their communities.” Fall said.

Supporting the development of the African continent is one of OCP Group’s strategic priorities.  To this end, OCP is striving to develop a sustainable agricultural ecosystem and provide innovative solutions for African farmers.

As a corporate citizen, OCP also carries out many socioeconomic initiatives, particularly through its Act4Community programme, which enables OCP employees to get involved in educational, cultural and job creation projects for the benefit of their communities.

OCP employees have successfully implemented a number of initiatives at the regional and local levels in the economic, environmental, health and educational fields.  Consequently, OCP’s investment in the Jr. NBA supports its efforts to develop local communities and African populations.

The Junior NBA programmes in Morocco and Rwanda will feature 30 boys and 30 girls school teams competing for their respective leagues’ championship.  Each school team will represent one of the 30 NBA teams in each league and will receive corresponding NBA team-branded jerseys for their games.

While speaking with the Nigerian Tribune at the event, Performance Manager, OCP Group and Volunteer Act4Community, Sara Sabor, said:”Today we are witnessing the launch of one of the most beautiful basketball court here in Khouribga.

“It is also a major launch of a great collaboration between the NBA and OCP where we will have American coaches training moroccan teenagers in the act of playing basketball.”

She described Act4Community as a body launched by OCP Group in order to serve the community. “OCP takes into consideration that the community needs to be emancipated and impact meaningfully on members of the community economically and socially.

“We at Act4Community treat so many key sectors such as agriculture, education, digital activities and today we are doing something in the sport sector. It is a very huge project.” She concluded.

Also speaking with the Nigerian Tribune during the partnership launch, American former professional basketball player, Walter Ray Allen, who played 18 seasons in the National Basketball Association (NBA) and was inducted into the Naismith Memorial Basket Hall of Fame as a player in 2018, commended OCP for the basketball development initiative.

Allen, who could not hide his excitement said he really appreciated the efforts put in by OCP to bring him and other NBA officials to Morocco with the sole aim of using basketball to empower the community.

He expressed optimism that many of the teenagers that would be partakers in the Jr. NBA programme would in the near future would in turn bring resources accrued from basketball probably outside the shores of Morocco back to the country to also impact meaningfully describing the opportunities abound in playing basketball as enormous.

He later took on teenagers in attendance on some rudiments of basketball as well as life skills session. Other side attractions of the event were musical performace from local groups, NBA dunk performance amomg others.

NBA Africa Managing Director and Basketball Africa League President, Amadou Gallo Fall, told the Nigerian Tribune that NBA Africa is poised to make the game of basketball accessible to a lot of young people from across Africa to dream about achieving greatness through sport particularly basketball.

“It is not just about making it to the NBA or not but they can do so many other things through the game of basketball. Playing basketball for example allowed me to go to the US on a scholarship.

“I was able to do what I am doing today because all the relatioships have allowed me to travel to many places to meet different kind of people. This is what we want to happen to these young Africans and I think OCP is working towards that by creating a platform like this to achieve their dreams and aspirations.”

As part of the NBA and OCP partnership, throughout the Jr. NBA season players and coaches will take part in interactive life-skills seminars focused on youth empowerment and designed to teach leadership, communication skills and health awareness.  The life-skills curriculum will be delivered by longstanding NBA partner, Hoops 4 Hope.

The Jr. NBA, the league’s global youth basketball participation programme for boys and girls, teaches the fundamental skills as well as the core values of the game at the grassroots level in an effort to help grow and improve the youth basketball experience for players, coaches and parents.       This year, the NBA is reaching more than 51 million youth in 75 countries through league play, in-school programming, clinics, skills challenges, and other outreach events.

In the second edition of the Jr. NBA Global Championship hosted in Orando, Florida two months ago, the Africa boys team won the international division to advance to the global championship game where they lost to the U.S. West boys team and finished as the tournament runner-up.  Marouf Moumine (Cameroon) was recognised with the tournament’s Determination Award for the second consecutive year.

The expansion of the Jr. NBA Leagues in Morocco and Rwanda builds on the NBA and OCP’s commitment to the development of the African continent and similar Jr. NBA programmes that have taken place in Angola, Cameroon, Guinea, Ivory Coast, Kenya, Mozambique, Nigeria, Republic of Congo, Senegal, South Africa, Tanzania and Uganda.