Legal fireworks will resume on Wednesday at the Supreme Court in the hearing of the 66-grounds of appeal filed by the presidential candidate of the Peoples Democratic Party (PDP) in the February 23, 2019 presidential election, Alhaji Atiku Abubakar and his party against the judgment of the Presidential Election Petition Tribunal which affirmed the election of President Muhammadu Buhari.

The hearing by the appeal, seeking to upturn the declaration of Buhari by the Independent National Electoral Commission (INEC) as the winner of the poll will commence today at the apex court in full blast.

Although names of the panel members have not been made public for security reasons, it is believed that the Chief Justice of Nigeria (CJN), Justice Ibrahim Tanko Muhammad will lead the panel that will decide the fate of parties in the matter.

Atiku and PDP’s appeal is predicated on 66 grounds in which they urged the apex court to set aside the decision of the tribunal in its entirety on grounds that the tribunal erred in law in arriving at a conclusion that the petitioners failed to prove their case against the respondents, who are the INEC, Buhari and the All Progressive Congress (APC).

They hinged their case on grounds that Buhari lied on oath in his form CF. 001 submitted to INEC to aid his clearance for the presidential election and also alleged Irregularities and substantial non-compliance with the Electoral Act and Guidelines during the election.

The appellants, while claiming that the Justice Mohammed Garba led tribunal erred in law by holding that Buhari was eminently qualified to contest the election, accused the tribunal of descending into defending the cause of Buhari in the petition.

They specifically accused the Justices of the Court of Appeal who sat at the tribunal of making use of evidence never pleaded/led at the trial by any of the respondents and sometimes credited statements to the respondents’ witnesses which were never made.

They submitted that: “There was no evidence at the trial that schooling at the Military Training School was “higher than Secondary School Certificate Education.

“The 2nd Respondent or any of the Respondents for that matter did not lead evidence on the meaning of “Officer Cadet.

The appellants further argued that INEC did not lead evidence wherein it informed the Court that it was satisfied with the qualification of Buhari.

Also Buhari, according to them throughout the trial did not lead any evidence to show that he successfully went through Primary School, Secondary School and famous Military College(s) in the USA, UK and or India, whereas the lower Court assumed he did.

In ground one of the appeal, Atiku and PDP submitted that the Justices of the Court of Appeal erred in law when they relied on “overall interest of justice” to hold that Buhari’s documents were properly admitted in evidence.

According to the appellants, the said documents which bordered around his certificates were neither pleaded nor front-loaded.

On ground two, relating to the ruling of the tribunal that Buhari does not need to attach his certificates to his form CF 001, the appellants submitted that the tribunal gave restrictive interpretation to Section 76 of the Electoral Act 2010 (as amended) in order to exclude Form CF001 from its provisions.

“The conduct of election by the 1st Respondent starts with the screening of candidates, they said “No candidate can be screened unless he completes Form CF001 (Exhibit P1).

“The lower Court held that Buhari passed with credits in English Language, Geography, History, Health Science, Hausa and a pass in English Literature in 1961 by inference when there was no evidence throughout the trial and indeed no evidence from the School Principal to the effect that the 2nd Respondent wrote or actually passed those subjects”, they argued.

In addition, they accused the tribunal of attaching evidential value to the military statement on Buhari’s certificate in making a case for Buhari after rejecting the same document for lack of probative value.

But the appellants submitted that they led sufficient evidence before the lower court to prove that Buhari lied concerning the schools he purported to have attended and Certificates obtained.

They said that the crucial issue in their case is that the purported claim by Buhari that his “Primary School Leaving Certificate, WASC and Officer Cadet” are with the Secretary of the Military Board is false.

On the issue of denying probative value on documents tendered by the petitioners for failure to call relevant witnesses, the appellants submitted that exhibits tendered before the lower Court were Certified True Copies of electoral documents.

“PW60, PW62 and other witnesses called by the appellants through their Statements on Oath which they adopted, had spoken to the Exhibits and tied them to the appellants’ case.

“RW7 called by the 2nd respondent was confronted with some of the electoral forms and he spoke to them and thereby tied them to the appellants’ case.

“Being Certified True Copies of public documents, there was no need to call the makers as a party can rely on entries on the face of result sheet.

“The exhibits were not in any way dumped on the lower Court, as erroneously held by the Court. PW60 analyzed and testified on the
effect and contents of the documents admitted as exhibits by the Court”, they argued.

The appellants also faulted the tribunal’s position on use of smart card reader on grounds that the prohibition on the use of electronic voting contained in section 52(1) (b) of the Electoral Act, 2010 was amended and deleted by the Electoral (Amendment) Act, 2015, Government Notice No. 26 of 31 March 2015, Federal Republic of Nigeria Official Gazette.

On the issue of not calling relevant witnesses, the appellants said the onus was on Buhari to prove or establish his assertion that the certificates he listed in Form CF001 filled and submitted to INEC were in fact with the Nigerian Military Board, especially in the face of the denial by the Nigerian Army vide exhibits P24 and P80.

“The appellants had no responsibility to call the then Director of Army Public Relations, Brig. Gen. Olajide Laleye.

“Exhibit P80 is the video recording and transcripts also tendered wherein the then Director of Army Public Relations, Brig-Gen Olajide Laleye denied the claim of the 2nd respondent that his certificates were with the Army. The said video was played in open court.

“Brigadier General Olajide Laleye was very clear in exhibit P24 (Same as R23) in his statement that neither the original copy or CTC nor Statement of Result of the 2nd respondent was found in his file.

They also submitted that the lower court failed to see that it is not only a polling agent or an official of INEC that can examine EC8As, EC8Bs and EC8Cs in respect of the eleven (11) focal States in order to determine who scored the majority of lawful votes cast at the election.

“The lower court failed to appreciate that ground 1 of the Petition is that the 2nd respondent was not duly elected by majority of lawful votes cast at the election and the facts in support of this ground are fully pleaded in the petition and supported in the evidence of PW60”.

According to them, the tribunal failed to see that the appellants pleaded various instances of non-compliance as well as corrupt practices that substantially affected the result of the election and argued that the evidence of the 62 witnesses called by them were not controverted by the respondents.

“There can be no presumption that the 1st respondent duly cleared the 2nd respondent to contest the election in the face of the provision of Section 31(1) of the Electoral Act, 2010 (as amended).

“By the force of the provision in this section, it is no longer within the discretion of the Commission (1st respondent) to clear or not to clear any candidate presented by a political party.

They are therefore asking the apex court to allow the appeal and set aside the Judgment of the Court of Appeal, delivered on September 11, 2019, in their petition numbered: CA/PEPC/002/2019.

They also prayed the court to grant all the reliefs sought in the petition and declare them the winner of the February 23 presidential poll or in the alternative anull the victory of Buhari and ordered for a fresh election. 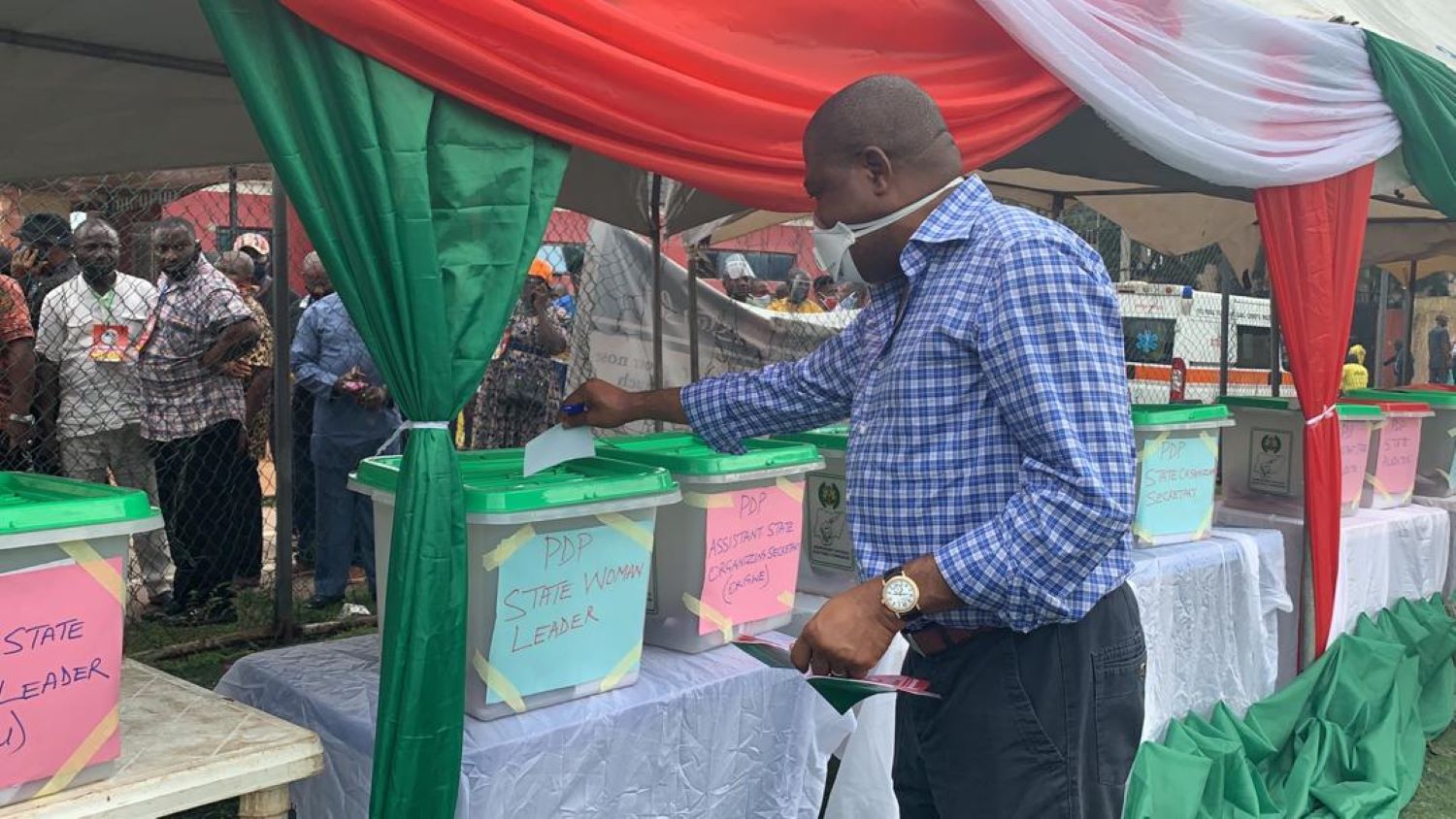 Ruling on Igbope being distinct from Igboho subsists, as court dismisses appeal