OVH Energy Limited, a Nigerian oil and gas downstream company, has announced Solomon Tolulope Oyakhire, 23 year old first class graduate of Chemical Engineering from the University of Lagos as the winner of its 2nd edition of its Prodigy Series writing competition themed “So You Think You Can Write’’ at an event held at its Apapa Office in Lagos on August 8, 2018.

This is following OVH Energy’s call for entries which it announced in May 2018 in commemoration of the 2018 United Nations World Innovation and Creativity Day – an observance designed to raise awareness of the role of creativity and innovation in problem-solving and by extension, in the implementation of the Sustainable Development Goals.

It is also a day set aside by the United Nations to celebrate the creative human mind, and encourage people to be innovative about making the world a better place to live.

It is against this backdrop that OVH Energy has tailored its writing competition to encourage the art of creative writing in Nigeria, with this year’s competition focusing on how corporations can positively influence their environment through socially responsible business practices in the 21st century.

Oyakhire’s entry came first out of the 1,024 entries received from candidates. His entry was adjudged to have the catchiest title for an article, boasts of strong content originality, coherent arguments well-marshalled and highly relevant to the subject topic. His submissions were replete with straight-to-the-point examples, proffering simple yet achievable business solutions.

All entries were graded based on originality and strength of proposed ideas; in-depth study/specific reference to the downstream oil and gas sector; grammar structure and coherence; use of English, paragraphing, spacing and punctuation; and adherence to writing terms and conditions. The results were based on the cumulative assessment scores of both internal and external judges.

Speaking at the event, the Chief Executive Officer, OVH Energy Marketing Limited, Mr. Huub Stokman said :“the winner represents the very best and brightest among the contenders. His essay explores contemporary themes with maturity, intelligence, and depth. We are proud of him and the thousands of other young writers who entered the competition this year from all around the Country.

The prodigy series expresses our vision of empowerment through education, and we are excited to be conducting this creative writing competition once again. The quality of the entries this year was exceptional, and all of us at OVH Energy would like to extend our congratulations to the winners”.

“As a business, this writing competition is one of the features of our thought leadership programme, which aims to promote learning and creative writing opportunities for young people”, therefore, the objective for us is two-pronged – to stir creative minds towards developing and enhancing their constructive and cognitive thinking skills, and as a thought catalyst platform for proffering pragmatic solutions to prevailing business issues”, he further added.

The external judge, Mr. Jahman Anikulapo, a culture advocate, curator and communicator; and Programme Chair of the Committee for Relevant Art, promoters of the Lagos Book & Art Festival(LABAF) commended the organisation for this noble venture as its contribution to boosting literary enthusiasm amongst the Nigeria youth.

He said: “The OVH Energy Prodigy Series project is a laudable initiative, with inherent objective of motivating the culture of critical, innovative thinking among the youths. It will also help to encourage young ones to become more engaged with issues in their socio-economic, political and cultural environment.”

“ The entries assessed by the jury which also included two other resource persons – a creative writer/Earth Scientist and a teacher of English – show the huge potentials of young people when given the opportunity to explore ideas, and especially to drive developments in their environment”, he added.

A visibly excited Tolulope Oyakhire who is set to pursue his PhD studies in Chemical Engineering at Stanford University starting September 2018 as a Knight-Hennessy scholar said, “Producing a well-crafted work of writing requires a lot of intellectual and mental exertion. But the feeling is exhilarating if you get rewarded for it, and that is the point I am at right now.

I feel profoundly honored to have been nominated and announced as the winner of this writing competition. I want to express my sincere appreciation to OVH Energy, the organisers of this noble initiative for creating this platform to reward creativity and skill; I feel greatly honoured indeed.

I encourage other young minds like mine to take advantage of every opportunity to improve their creative writing skills by reading a wide range of materials which will contribute significantly to their intellectual capacity to engage in such contests in the future”.

Tolulope got a cash prize of 500,000 and his entry will also be published in one of the national dailies.

OVH Energy also rewarded the 1st and the 2nd runner-up in the writing competition with N200, 000 and N100, 000 cash prizes respectively.

The amazing strides of a prodigy in Ado-Ekiti

The amazing strides of a prodigy in Ado-Ekiti (2)

The amazing strides of a prodigy in Ado-Ekiti (3) 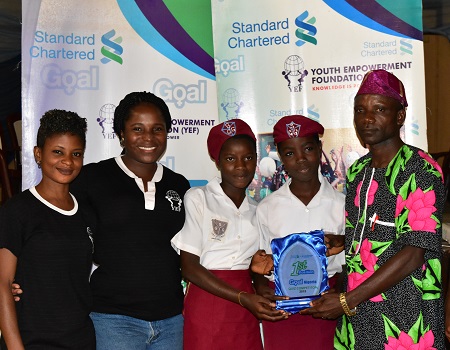