France threatens U.S. with sanctions if it fails to resolve airbus dispute

France threatens U.S. with sanctions if it fails to resolve airbus dispute

French Finance Minister, Bruno Le Maire, on Thursday threatened to impose sanctions against the U.S. if it would not resolve an Airbus dispute.

“If the American administration rejects the hand that has been held out by France and the European Union, we are preparing ourselves to react with sanctions.’’

On Wednesday, the U.S. won a $7.5 billion Airbus subsidy case and requested the World Trade Organisation (WTO) to approve 10 per cent tariffs on civil aircraft from the EU.

The EU threatened to retaliate if Washington proceeds with slapping tariffs on $7.5 billion worth of its goods after the WTO ruled on behalf of the U.S.

Following the ruling, the U.S. requested the WTO to schedule a meeting on Oct. 14 to approve a request to impose a 10 per cent tariff against large EU-made aircraft.

According to U.S. Trade Representative, Robert Lighthizer, the U.S. would begin to impose WTO-approved tariffs on European-made Airbus planes, French wine, Scotch and Irish whiskies, and cheese from across the continent on Oct. 18.

The trade dispute between the two major aircraft makers began in 2004 when Washington accused the UK, France, Germany and Spain of providing illegal subsidies and grants to Airbus.

The EU complaint is also being investigated by the WTO, with a ruling expected in about eight months. (NAN)

Iran to target US bases if national security threatened – official

NBC threatens to sanction broadcasters over politicising of COVID-19 reportage 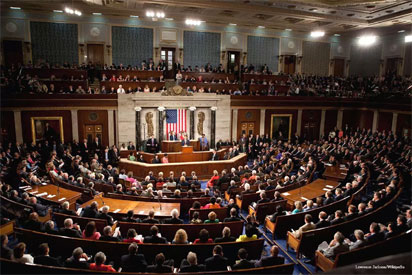 US will pull others down with it

Breaking: TCN threatens to shut down operation if Mohammed is not reinstated