BENIN CITY – A chief- tain of the All Progressives Congress, APC, who was the governorship candidate of the Peoples Democratic Party, PDP, in the Edo State 2016 governorship election, Pastor Osagie OIze-Iyamu has said that Governor Godwin Obaseki should be held responsible for the crisis rocking the state House of Assembly.

He claimed 10 out of the 24 members are presently carrying out legislative functions while the seats of the remaining 14 have been declared vacant by the Speaker, Frank Okiye.

In an interview with Vanguard yesterday, Ize-Iyamu who recently defected to APC amid resistance from some government and party officials said the crisis has affected governance in the state.

He said; “I can tell you that I really believed the governor did not handle the situation well because if you play back now, you will find out that for the past one year all we hear about is crisis and crisis I have not seen any project being commissioned, I have not seen anything serious being done. In any meeting, everything that is being talked about is about the problems that they have.

“Nobody was elected to begin to lament about problems or to begin to issue threats, if your party was able to secure a hundred per cent in the house of assembly, that is something that they should celebrate, now it becomes absurd that such a feat will turn to an albatross, to imagine that out of your 24 only a few number will now be inaugurated, is sad.”

According to him, “Of course, nobody has disputed the fact that even when they wanted to complain, they went to do a press conference, they were attacked, they were beaten and that was what led to their moving to Abuja.

“Now, they have instituted series of court cases. What should have been done is that the governor knowing that we cannot run our democracy without the second arm of government should have initiated serious processes to unite the house. Even if it means meeting the people in Abuja to reassure them of their safety but from that time till now, we have never had of any such meeting till it got to the extent where the Speaker just announced that he has declared their seats vacant.

“You are not doing this to people in the opposition party, you are doing this to your own members and the number questions your popularity because you are saying that in the house of 24, you have declared 14 seats vacant, it means that it is even a minority that is holding sway in the house and you have driven away the majority. Out of that majority for example, Edo South Senatorial District where I come from that had ten people in the house before is now left with three, that is enough to make people protest”.

, the area now has three representatives by the singular action of a member that was elected in his own constituency just like the others.”

Will Ize-Iyamu Upturn The Table Against Obaseki? 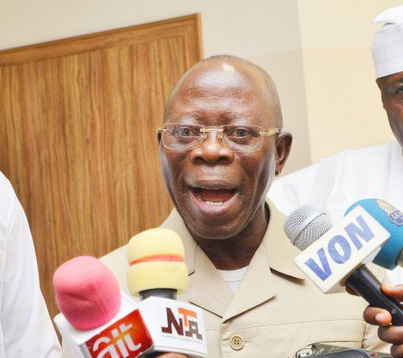 APC: Oyegun, Oshiomhole to campaign for Ize-Iyamu in Edo

APC: Oyegun, Oshiomhole to campaign for Ize-Iyamu in Edo

Obaseki vs Ize-Iyamu: No free dollars for you to loot in Edo – PDP fires back at Ganduje