If I had five million dollars

If I had five million dollars

I had many things lined up for last Friday. I was actually looking forward to some of them; like my time at the club for instance. But they paled into insignificance as soon as I heard what was going to be on DSTV that evening. It was tagged: ‘The Match in Africa.’

It was the first time ever and probably the only time that the two greatest Tennis players of all time (GOAT) would be duelling in Africa. I just knew I had to be in front of my TV by six-thirty. Just as I knew many tennis fans all over the world would be glued to their TV sets.

It was gratifying to learn later that the attendance at the improvised stadium broke the all-time attendance record.

I could write a book on Roger Federer and Raphael Nadal who between them have 39 Grand Slams—more than what all the others in the field have in the last decade and a half. I could write about their intense rivalry and the nearly six hour duel in 2006, which has been described as the longest Grand Slam Final ever.

Nadal won on the day more by grit than by skill as there was nothing to choose between them. I could write about the resultant respect for each other that has now blossomed into friendship. I could write about their ambassadorial roles for the sport of tennis as both have led scandal free careers. But those would be topics for other days, probably when one of them hangs his racquet.

Today, is not about tennis. But for the records, Federer is not my main man. Nadal is—and Pete Sampras before him. But I can’t help but admire what a great statesman and what a role model Federer has gradually become over the years. Last Friday’s match which was organised for his foundation is a testimony to the character of the man. He says he wants to be known more for his foundation than for his tennis prowess in future.

That would be a tall order considering what he has achieved in tennis. It is a lofty and admirable goal to aim for though; especially since he wants to bring his children into his foundation. He started his foundation in 2003. Think about it, he was just about 21 then. Yet, he knew enough to want to give back. Last Friday’s was not his first exhibition match.

But it was his biggest; and he had Bill Gates, the world’s second richest man as his doubles partner. He has over the years, provided for over a million children in South Africa. His choice of South Africa is heart-warming because he has never been ashamed to identify with his Third World roots.

His mother is a South African. It would have been easy for him to block that out as many successful athletes have done. On the contrary, he has focused his charitable attentions on the young in South Africa and visits as often as he can. This disposition, and that of our own Anthony Joshua by the way, should be commended. Identifying with their roots has taken nothing away from them. If anything, it has enriched them. ‘A river which forgets its source will soon dry up’ says an African proverb.

We hope Anthony Joshua will bring awareness to and do something for the poorest of the poor in his fatherland soon. I want to commend Kanu Nwankwo at this point, for his Heart Foundation and the many lives he must have saved through his foundation. He remains an example to younger Nigerian athletes.

I have never craved for such an indulgence. It could not be a fleet of cars. I outgrew that vanity long ago when I was in my 30s. It could not be luxury travels round the world. As attractive as that would be, the increasing visa hassles are putting me off. Besides, you don’t need that much money to travel. Finally, could it be on my children?

They would benefit but I am not one to provide for generations unborn. Besides, they already have much more than I ever got from my own parents and the joys of life come largely from self-fulfilment. So after a few days of introspection, I can honestly say that the bulk of it would go to health or education for the poor with the pendulum swinging more towards the former.

Last week, during a private conversation with Mr Audu Ogbeh, the former Minister for Agriculture, my heart was warmed when he told me of his plans in conjunction with the Catholic Church and some affluent but compassionate individuals to build some hospitals to cater for the needs of the poor. He also believes that with as little as a thousand Naira from every Catholic, hospitals can be built in every major city for the poor.

He has always been passionate about the poor; especially in the North. He is even more so now with the chaos and the dog-eat-dog situation in the region caused mainly by poverty. He blames the 774 local governments in the country which collect a minimum of 120 million naira each month for their failure to positively affect the rural communities.

Last month, I went to National Orthopaedic Hospital, Yaba with a friend. Our aim was to visit the place and LASUTH to help offset some medical bills. Three of us had contributed some money last year for this purpose. We were confronted with the case file of a seven-year old boy with severe burns.

He would need up to 3 million Naira for surgeries and drugs alone. He had not been able to have the first surgery because of funds. The incident happened when he was with his grandmother where his mother left him. The mother is in her 20s.

The father could not be traced. We didn’t hesitate before we gave all we had so surgery could start. LASUTH would have to wait. We then headed for ‘white house’, a local eatery in Yaba for lunch. The pounded yam I took tasted good because I felt good. I had just helped in giving a young boy who will never know me and my two friends, a chance to survive. 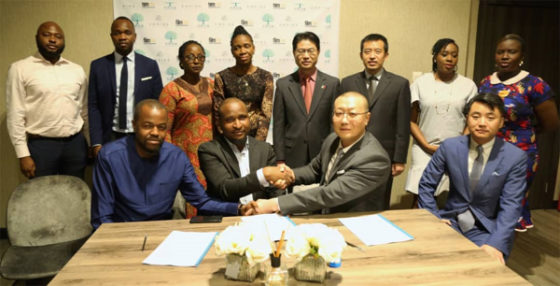 How Presidency traced ex-cleaner who returned millions of dollars

40 years ago, I warned that Lake Chad would dry up if… —Oba Adesina

40 years ago, I warned that Lake Chad would dry up if… —Oba Adesina

Joshua: I Won’t Celebrate If I Regain My Belts From Ruiz