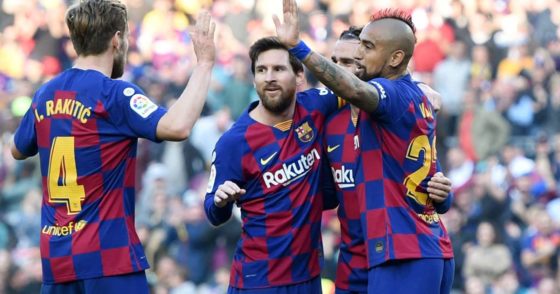 Lionel Messi was in inspirational form as he scored four goals including a first-half hat-trick to lead Barcelona to an easy 5-0 win over Eibar at the end of a difficult week for the club.

Messi had gone over a month without a goal in LaLiga before Saturday but once he found his groove there was no hope for hapless Eibar, as Barca’s talisman tore the visitors apart at will.

Much of the build-up to the contest had been dominated by off-field matters, including the controversial out-of-window signing of Martin Braithwaite and president Josep Maria Bartomeu denying the club hired a firm to “damage the image” of players past and present, including Messi.

Yet Messi appeared unencumbered by the controversies, the Argentina superstar scoring a wonderful treble in the first half before adding a late fourth, while a goal for Arthur completed a handsome triumph ahead of a potentially season-defining week which includes clashes with Napoli and Real Madrid.

The white handkerchiefs were being waved with vigour in the direction of Bartomeu by many supporters even before kick-off, and for a moment early on in the contest they looked to have another reason to fume, as Sergi Enrich emphatically headed in.

But the offside flag spared Barca from falling behind and Messi soon took charge, opening the scoring with a remarkable goal – coolly clipping a delicate effort past Marko Dmitrovic having nutmegged Anaitz Arbilla and held off Papa Diop.

It was 2-0 in the 37th minute, Messi again driving into the box and picking out the bottom-right corner with aplomb.

And he swiftly completed his treble, turning in from close range after Antoine Griezmann wasted an opportunity to shoot.

The hosts appeared to ease off after the break, with the only notable opportunity before the hour-mark seeing Ivan Rakitic thwarted by Dmitrovic after Griezmann’s cross.

However, Barca eventually increased the deficit in the final three minutes – Messi scoring his fourth after toying with the Eibar defence before Arthur’s straightforward finish, with substitute Braithwaite showing his usefulness by having a hand in both.