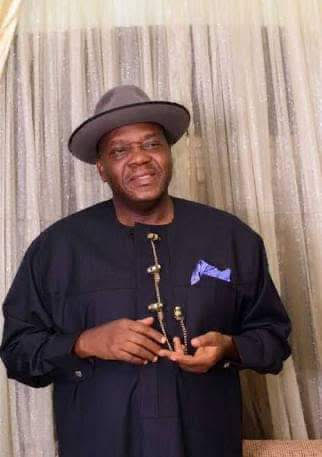 This was contained in a statement signed by the Senior Special Assistant to the President on Media & Publicity, Garba Shehu, which the President acknowledged Amb Igali’s selfless service to the country, especially as career diplomat to several countries.

“The President rejoices with the family, friends and political associates of the Bayelsa State-born former career diplomat, retired federal permanent secretary, academic and author, as he celebrates this milestone.

“President Buhari commends the over three decades Amb. Igali devoted to a distinguished service of his fatherland, especially while serving as Nigeria’s top diplomat in various countries.”

Meanwhile, the President also wished the former Federal Permanent Secretary on his new political aspiration to run for Bayelsa Central Senatorial District seat at the National Assembly under the platform of the ruling All Progressives Congress, APC.

“He wishes the All Progressives Congress (APC) senatorial aspirant in the forthcoming Bayelsa rerun election more years of worthy service to the nation and humanity”, it added.

Amb Igali who hails from Eniwari, in Southern Ijaw Local Government Area of Bayelsa State, was born on April 4, 1960, in Oporoma, the  Local Government Headquarters which is also his maternal home.

Meanwhile, Amb Igali had on Saturday expressed immense gratitude to God for preserving and graciously attaining 60 years on April 4, 2020, and he said his life and career have been orchestrated by the hand of God who raised him to the level he is presently.

Amb Igali served as a Career Diplomat, which he was on foreign posting to several countries in Europe, Latin America and  Africa

In his chosen career, he   distinguishing himself in Economic Diplomacy and served as Secretary 10 Nigerians Economic Missions abroad from 1986-1991. He had his first diplomatic posting to Czechoslovakia at the age of 23 and successfully negotiated on behalf of Nigeria to purchase the latest L39 Airforce jets then from that country.

He was given rare privilege to serve as Secretary to the Committee on Export to West Africa and as Special Assistant to various Ministers of Foreign Affairs, which led to his appointment as the Nigerian Consul General to Cameroon from 1999 – 2005.

It is now part of history as far as diplomatic relationship of Nigeria and other countries is concerned, which he was in Cameroon, Nigeria’s neighbouring country in Central Africa, played a key role in the Bakassi Peninsular peace effort following border dispute between the two countries, which led to the 2002 critical judgment by the International Court of Justice, ICJ, at the Hague, Netherlands, laying the delicate matter to rest under President.

He was reputed for his gallantry in engaging Cameroonian Gendarmes in protecting Nigerian settlers; including travelling to their settlements off the high seas to proect them.

Earlier in 2004-2005 under Former President of Nigeria, Dr Olusegun Obasanjo (GCRF), Amb lgali had successfully engaged and convinced the return to Nigeria by over 100,000 Nigerian Fulani’s and 60,000 TIV’s who had fled into Cameroon for years due to inter ethnic crises in the in the Mambilla Plateau, North East, Nigeria. He accompanied their return trips to Nigeria and obtained commendation from United Nations High Commission for Refugees, UNHCR. He was also able to regularise immigration papers of Nigerians living in Cameroon.

On return to Nigeria, Amb Igali, served as Special Assistant on Special Duties to the former President Obasanjo2005 – 2006, under the President Olusegun Obasanjo administration, and performed excellently well.

Being a true son of Izonland and the Niger Delta he has been actively involved in issues of the Niger Delta region, which former President Obasanjo explored and harnessed his negotiation skills and was appointed Special Assistant on Special Duties and Honorary Adviser and Peace Envoy to the Niger Delta when militancy and agitation were heightened.

He spearheaded negotiations with various militant camps, which the Movement for the Emancipation of the Niger Delta, MEND, emerged and was prominent. With his dogged patriotism and quest for peace in the region engaged several leaders of the militants and other stakeholders, which brought about a successful general election conducted in 2007.

At the time he used his rare negotiation expertise to secure release of kidnapped expatriates in the Niger Delta region. It is reported that on several occasions,  Amb Igali who was leading a team of retired Generals and Security Experts,  met life threatening situations,  both in the hands of militants and Other groups.

Being the secretary then of the Presidential Council of the Coastal States of the Niger Delta during the Obasanjo-led administration and suggested Amnesty programme in a meeting of the Council that held on February 27, 2007.

Based on merit and his wealth of experience, late President Umaru Musa Yar’Adua in June 2007 appointed him as the substantive Adviser on the Niger Delta. It was during his tenure as the presidential adviser that the framework for the Niger Delta Amnesty programme was developed.

He was also one of the leaders of the Pan-Niger Delta Forum which helped to facilitate dialogue between the Federal Government and the Niger Delta Avengers, who were a resurgent militant group in the region that grounded and reduce oil production to 900,000 barrels per day from the budgeted 2.3 million barrels per day.

He was appointed by President Umaru Musa Yar’Adua in September 2007 as an ambassador to the Scandinavian countries of Sweden, Denmark, Finland and Norway from 2008 – 2010, which was his last diplomatic posting. During this period he was responsible for exchange of 12 Economic Missions, and the impact was massive on direct foreign investment inflow into Nigeria.

As a strategist, he successfully hosted Nigeria’s 500-man Delegation to COP 15 Climate Change Summit in December, 2009. He is an author and expert on Negotiation, Conflict Resolution, State Formation, National Integration and Sustainable Development. In 2005 he received the national honours of the Officer of the Order of the Niger (OON).

He was a key figure behind the garnering of global resourcee for Urban Water Supply in suvh places ss Lagos,  Kaduna and Portharcourt,  as well as Small Town and Rural Water Supply Programmes.

In the Power Sector, he left a mark as the best administrator ever. He was honoured in Enugu in 2018, by Nigerian Electricity Workers Union for his transformational efforts and Staff Welfare efforts.

He is a man with a compassionate heart that is humble and feels the pulse of the downtrodden and has been a source of joy to the less privileged being a silent and outstanding philanthropist who has a lot of primary school pupils, students of high schools and tertiary institutions on his personal scholarship scheme.

This rare gift to humanity is also is Chairperson of several boards and board member of several international business concerns. At present, he also seats on the Board of four universities in Nigeria.

It is amazing to know that he was founding President, Foundation for Vocational Education Development in Nigeria which focuses on youth entrepreneurship development,  technical education and youth inclusiveness.

He is an author of three bestselling books including; Perspectives on Nation-State Formation in Contemporary Africa – a book about the challenges of state formation and national integration in Africa; Global Trends in State Formation – on the emergence of the modern state system, the disintegration of states, and suggestions that will bring stability and peaceful coexistence; and Signposts to Success – a motivational guide where he analysed the accounts of the biblical King David and some other successful individuals in history.

On his political career he contested for the position of governor during Peoples Democratic Party, PDP, Bayelsa State Chapter, primaries in 2011 and also 2019.

Since exiting from Government service at the young age of 55 years in November, 2015, Dr Igali has been engaged in peace building and leadership in the Niger Delta. In this respect,  he is a founding key figure in both the European Union funded Niger Delta Dialogue and the Pan Niger Delta Forum (PANDEF), led  by Chief Dr Edwin Clark.

He holds a chieftaincy title the Ibetariwei  of Izon”Guardian of the Interests” of the Ijaw ethnic nationality. He has also been honoured with titles all over Niger.

In recognition of his outstanding and sacrificial national service,  President Obasanjo in 2006, decorated him with Officer of the Order of the Niger (OON).

He is a devout Christian who studied theology under late Bishop Harford Iloputaife at the Bible Faith Training Centre in Lagos in 1989.

He is married to Mrs. Tokoni Igali and they have four daughters and a son.

Buhari felicitates with Gov Abiodun at 60

Sanwo-Olu Felicitates With Momodu At 60

PMB Rejoices With Dele Momodu At 60

Buhari felicitates with Tinubu at 68

Buhari Felicitates with Tinubu at 68

Kyari was a patriot, rendered selfless service to Nigeria ― Malami