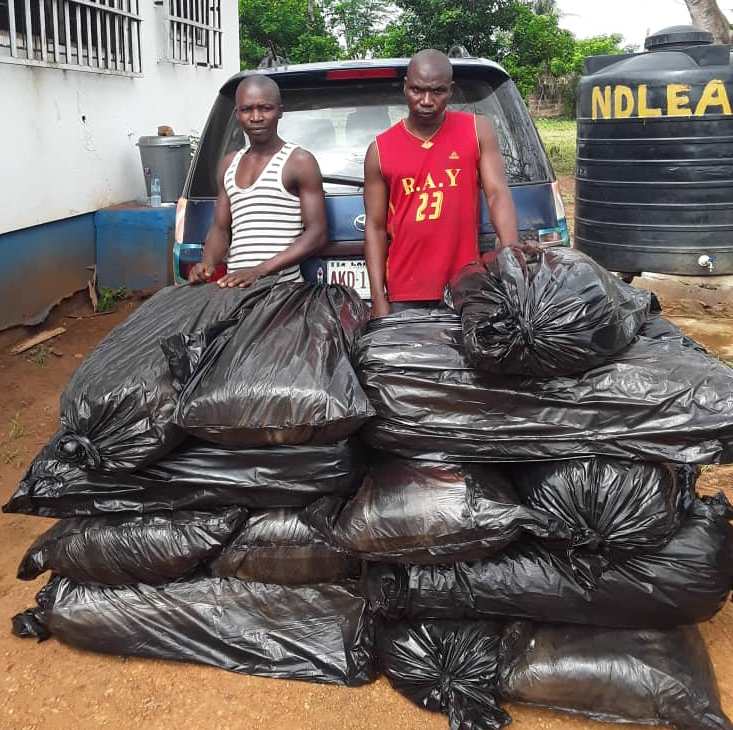 A forty-seven-year-old suspected drug trafficker, Isaac Echi arrested in Edo State by officials of the National Drug Law Enforcement Agency (NDLEA) on Tuesday, said that he sustained his family with illicit drug proceeds during the COVID 19 lockdown order.

He was arrested with 33 years old Odeh Stephen who was caught with seventeen bags of dried weeds that tested positive for cannabis Sativa weighing 198kgs.

NDLEA Commander in the State, Mr. Buba Wakawa while parading the suspects expressed satisfaction with the arrest adding that those who engage in drug trafficking will be apprehended in this season of COVID-19 pandemic. He said, “the laws of the country are still in operation, therefore those who traffic illicit drugs should expect the law to take its course.”

Wakawa said a Toyota Previa bus with registration number, Lagos AKD 118 AX conveying the illicit drugs were also impounded by anti-narcotics officers attached to the Okada Area Command. The detection and arrest took place at Egbeta-Okada, Ovia North East Local Government Area of the State following a tip-off. He said the arrangement is on to take them to court for prosecution.

Echi from Abi, Ndokwa West Local Government Area of Delta state said he lives in Okada with his wife and four children adding that he is a farmer but proceeds from cannabis smuggling have become his palliative this season of stay at home.

He said “I am a farmer but I also deal in cannabis to make ends meet. I am an intermediary between the seller and buyer. My commission is two thousand naira per bag amounting to thirty-four thousand naira. This is how I have been surviving this season. Though there is a lockdown, the drug business is still going on because customers keep coming to buy cannabis”.

The second suspect, Odeh Stephen from Yache in Yala local government area of Cross Rivers State said that he was contacted to convey the drug. “I am an artist by profession and I also use my bus for hire services. Isaac called me that he has some goods to convey. While on our way, we were arrested by NDLEA officers”

It was gathered that despite the lock-down, drug traffickers have continued to smuggle drugs. First, six vehicles containing 1, 687 kgs of cannabis were impounded at Agenebode in Etsako Local Government Area. There was also the seizure of 672 kilograms of cannabis at Ibillo by officers attached to the Auchi Area command.

We will continue to tackles drug abuse, trafficking in Anambra ― NDLEA

Chadian army general, others on trial for drug trafficking