The family of a Libyan smuggler killed by migrants have taken revenge by killing 26 Bangladeshis and four Africans, the country’s UN-recognised government said Thursday.

The killings allegedly by the Libyan smuggler’s family took place in the town of Mezdah, some 150 kilometres (95 miles) south of the North African country’s capital Tripoli, the interior ministry said.

It said the 30-year-old smuggler had been killed by “clandestine migrants” for unknown reasons.

In revenge, members of his family killed 30 migrants.

Eleven other migrants, whose nationalities it did not specify, were injured and admitted to hospital in Zentan, 170 km southwest of Tripoli, it said.

The ministry vowed to track down the migrants’ killers and bring them to justice.

The fall and killing of veteran dictator Moamer Kadhafi in a 2011 uprising sparked years of chaos that traffickers have exploited to turn Libya into a key route for illicit migration towards Europe.

Several thousand migrants from sub-Saharan Africa and Asia are stranded in Libya in horrifying conditions.

Their situation has become even more critical since eastern military strongman Khalifa Haftar launched an assault on Tripoli in 2019, followed this year by the outbreak of the novel coronavirus. 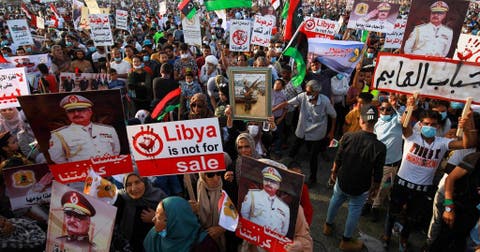