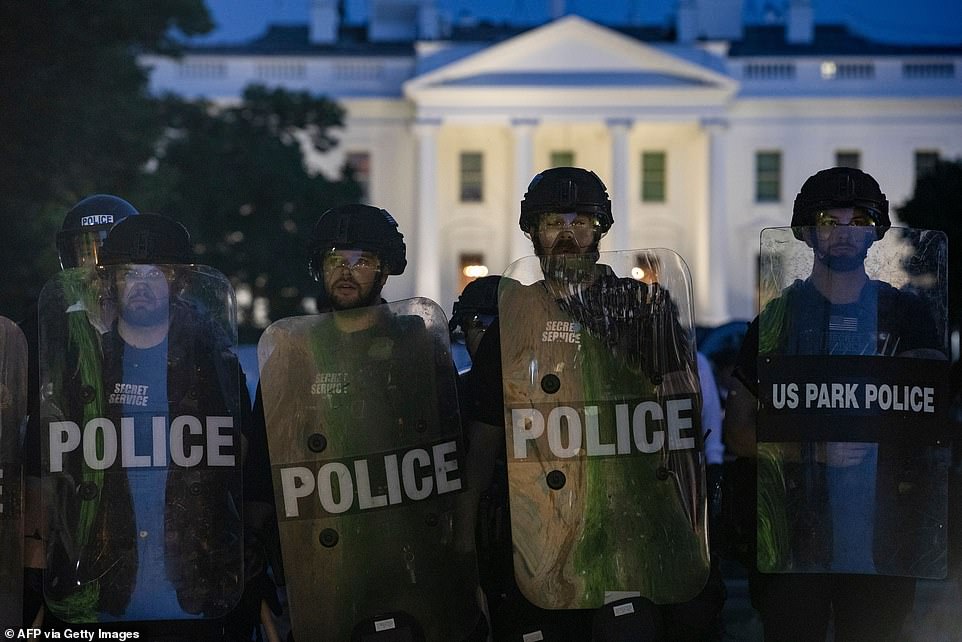 A man has been shot dead by law enforcement officers in Louisville on the fourth night of unrest following the death of unarmed black man George Floyd, local media reports.

It is not clear if the man was shot by National Guard – who were brought in on Saturday to quell the unrest in the city – or by a police officer.

The man, understood to be the owner of a local restaurant, was killed shortly after midnight when a large crowd gathered one hour after the ‘dusk to dawn’ curfew began.

Reports suggest that a crowd in a parking lot open fired on the police who shot back, WLKY reported.

While it is not yet known if the man was part of the protests, the victim would be the first person killed by an officer during the nation-wide unrest.

Protests have erupted up and down the country after white police officer Derek Chauvin knelt on unarmed George Floyd’s neck for eight minutes and 46 seconds last week, despite Floyd’s desperate repeated pleas for help crying, ‘I can’t breathe’. Floyd passed out and later died.

His death is seen as a symbol of systemic police brutality against African-Americans sparking outrage country-wide.

Tens of thousands of people gathered as the National Guard was deployed to over half the states in the country on Sunday for protests that have seen 4,100 people get arrested this weekend alone.

But even the threat of heavy officer presence didn’t deter protesters in Philadelphia from hurling rocks and Molotov cocktails at police, crowds to raid stores including Coach and Chanel in New York and San Francisco, and fires being ignited mere feet from the White House.

Late Sunday in Washington D.C. a fire was set ablaze in the historic St. John’s Episcopal Church and Lafayette Park in front of the White House.

This week hundreds of protests have unfolded in at least 145 cities across the country as people gather in outrage over the horrifying death of George Floyd, a black man who was killed while in the custody of a white police officer in Minneapolis, Minnesota on Memorial Day.

The demonstrations have marked unparalleled civil unrest in the US that hasn’t been seen since the 1968 assassination of Rev. Dr. Martin Luther King Jr.

At least 40 cities have imposed curfews in light of the riots and violence and National Guard members have been activated in 26 states and Washington, DC.

Washington state governor Jay Inslee was among those to send for the National Guard after vandalism and looting in multiple cities, calling the riots ‘illegal and dangerous’ but adding they should not ‘detract from the anger so many feel at the deep injustice laid so ugly and bare by the death of George Floyd’.

In total at least five people have been killed in protest violence after gunfire rang out in Detroit and Indianapolis and in Omaha a 22-year-old black protester was killed in a struggle with a local business owner.

Two Atlanta police officers were fired Sunday after video emerged showing them using excessive force during protests this weekend, including tasing and dragging two college students from a car.

St. John’s cathedral, which was opened in 1816, was set ablaze Sunday night in the nation’s capital, but it’s not clear how the fire started. The fire was put out shortly after 11pm.

A fire was also set in Lafayette Park, located just in front of the White House, where a protester set a US flag on fire sending smoke into the air as more than 1,000 gathered and raised their fists in solidarity.

Leader of One Million Boys shot dead in Ibadan

BREAKING: Leader of ‘One Million Boys’ shot dead in Ibadan

The George Floyd killing: Dissimilarities between Nigerian laws and US laws (2)