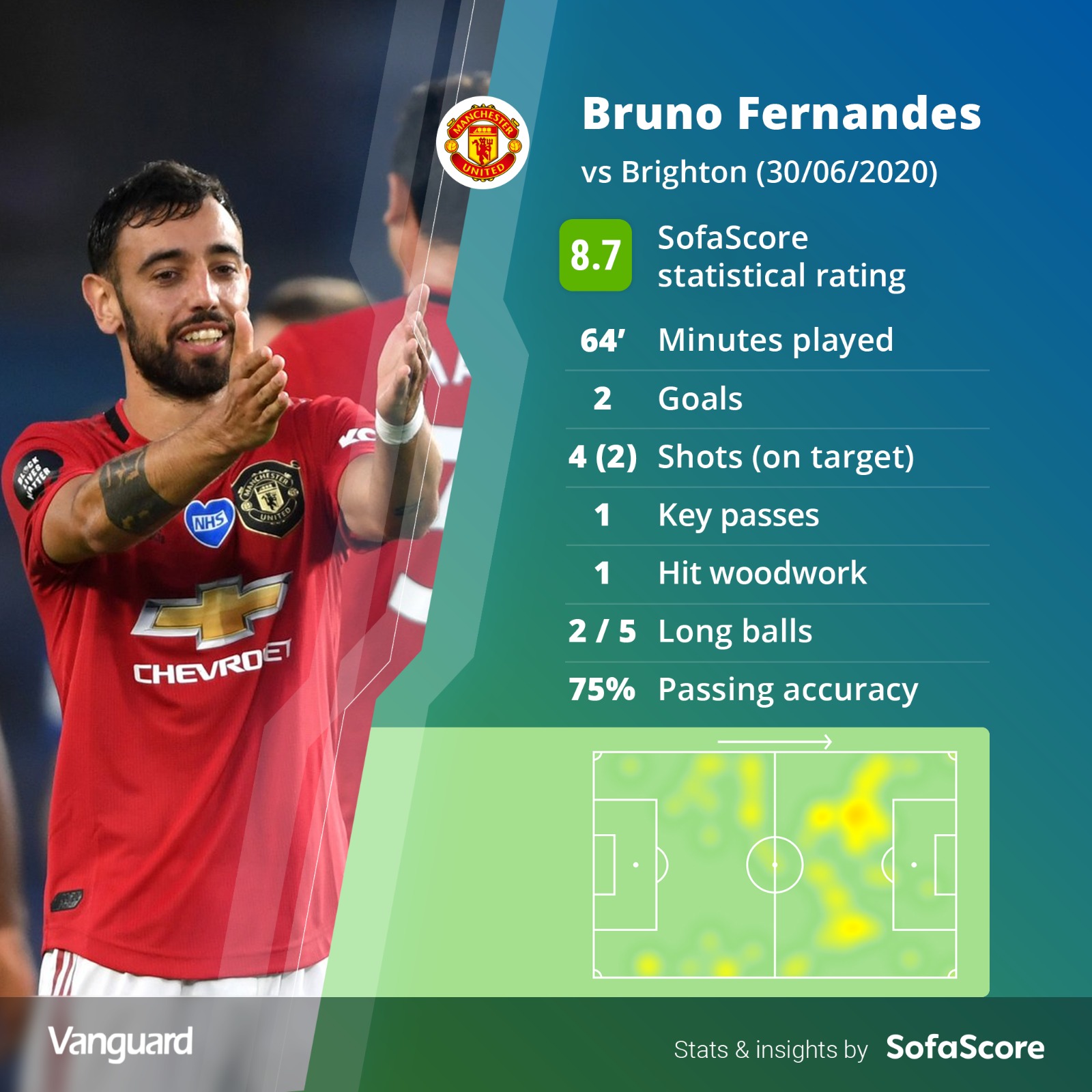 Ole Gunnar Solskjaer said Bruno Fernandes has brought a winning mentality to Manchester United after his brace inspired an impressive 3-0 win at Brighton on Tuesday.

Cajoled by the dazzling Fernandes, United produced one of their best performances of the season at the Amex Stadium.

Mason Greenwood opened the scoring early in the first half and Fernandes doubled the lead before the interval.

Fernandes netted again after half-time with a fine volley as United climbed above Wolves on goal difference to take fifth place in the Premier League.

“Bruno has come and been fantastic. He has brought that winning mentality with him, that 99 percent is not good enough. It has to be 100 percent,” Solskjaer said.

“I’ve got more than one game-changer. The third goal was a great team goal. To see so many players sprinting forward to get on the end of it was fantastic. A great finish by Bruno.”

Solskjaer’s side are two points behind fourth-placed Chelsea, who play their game in hand at West Ham on Wednesday.

With fifth place securing qualification for the Champions League if second-placed Manchester City’s European ban is upheld, United are in a strong position to return to the continent’s elite club competition.

If they make it, United will owe a huge debt of gratitude to Fernandes, who has scored six goals since arriving from Sporting Lisbon in January.

The Portugal midfielder’s role in revitalising United cannot be understated.

They were mired in a major slump before Fernandes’ signing, but are now on a 15-game unbeaten run in all competitions, including three successive wins.

“It’s a joy to watch them when you see them express themselves like that,” Solskjaer said.

“The confidence comes from performances. They worked hard during the lockdown and we know we have loads to play for.

“I don’t care about making a statement, I know we are a good team.”

United are also looking more solid at the back with eight clean sheets in their last 13 league matches.

With a run-in that includes games against Bournemouth, Aston Villa and West Ham, Solskjaer’s men could enjoy a memorable conclusion to the campaign as they also chase success in the FA Cup and Europa League.

Brighton had taken four points from two games since the restart, easing their relegation fears, but this defeat means they aren’t completely safe yet.

Harry Maguire led United’s charge with a long pass to Paul Pogba, who rolled it into the path of Fernandes for a fierce drive that cannoned back off the post.

Solskjaer this week warned United’s strikers they must improve if they want to stay in the team.

It was a message that Greenwood had clearly taken to heart as the 18-year-old produced a fine strike to open the scoring in the 16th minute.

Cutting in from the right, Greenwood froze Lewis Dunk with a nimble step-over and drilled a low shot past Brighton keeper Mat Ryan at his near post.

“He’s a special talent. He’s getting better. You can see clearly that he’s maturing and improving,” Solskjaer said of Greenwood.

Greenwood’s 13th goal of the season in all competitions was the signal for United to take complete control.

Maguire almost made it two with a header that looped narrowly wide and in the 29th minute Brighton cracked again.

Luke Shaw’s run unhinged the Albion defence and Pogba worked the ball back to Fernandes, whose shot deflected off Alexis Mac Allister and squirmed past Ryan from the edge of the area.

Fernandes wasn’t finished yet and he put the game out of Brighton’s reach at the climax of a swaggering United counter in the 50th minute.

Nemanja Matic’s cross-field pass sent Greenwood sprinting away down the left and the teenager unfurled a perfect cross for Fernandes to volley past Ryan from 12 yards.

Will Sony’s PlayStation 5 be a Game Changer?

‘My new office a game changer to boost Ekiti tourism’